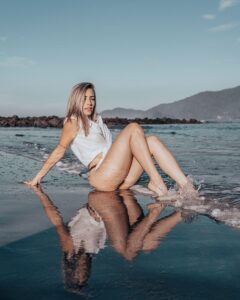 SAND AND SALT…
Let me start this by laying down some basics about your woman that your father didn’t or couldn’t tell you. She is irresistibly attracted to power in a man. She chose you because she saw your power potential. She brings life into the world and nature has endowed her with a drive to find a good partner. She bets her most precious assets, her youthful beauty and fertility, on finding the best partner she can.

Most men in relationships who are chosen by a gal become comfortable, because her attention reminds him of the positive regard he felt under the warm gaze of the maternal attention of his youth. This might be you directly or not, but for most men my guess is you are needy.

You don’t think you are, but trust me, she can sense it a mile away…

How does this happen? You come by it honestly.

Typically, men learn this at their mother’s knee buying into mom’s promise of love to mitigate a threat of abandonment or withdrawal. Mom had two jobs: keep you alive and raise you so you won’t embarrass her. She used fear and the promise of love to achieve her aims. Carrot and stick.

Is it any wonder that males later seek their mother’s mythical unconditional love in their adult partners? It’s been wired into your very survival. Brought up with this need embodied in your neurons, you seek the carrot for winning mommy’s approval. Think men don’t want to please their wives? Ha! Happy wife, happy life…

Only, your gal chose you for your power (or at least, power potential as mentioned) and doesn’t at all get why you would need unconditional love from her. She’s puzzled in fact and can only view this need as a weakness which threatens her deal with nature itself. It’s such a turn off, it dries her pussy as surely as pouring sand in it.

Speaking of which: when she senses your weakness, she will sometimes tell you, rarely directly. When does let you know, I call that kind of woman a unicorn.

Rare indeed, I’ve been around long enough to know it does happen.

More likely, she rubs salt in the wounds of your weakness (makes up for the sand you metaphorically dumped in her pussy), or she holds you in silent contempt (again, for pouring sand in her pussy). If you had a pussy and someone dumped sand in it, what would you do? (warning: I’m not done with the sand in pussy theme).

Either way, she must stop fucking you… right away or eventually. Why? Because what she sees is a boy in a man’s body. It’s confusing to her. Psychically painful for her at a deep, instinctual, existential level.

How many grown women sleep with boys? I know, I know, the odd one (usually married to a weak man) loses it and tosses in with the neighbourhood kids or a student while one’s going through puberty. These desperate women exist as clear outliers. But most women won’t fuck a child.

Her pact with the universe is to find a powerful man and to do that she chooses using all her talent and guile, often enlisting the sisterhood in her cause. It’s one of her grandest quests outside motherhood itself. This fact of women choosing has spawned romance and poetry and more in the name of love throughout the ages.

If she finds a boy disguised as a man, she has failed. She can be fooled, blinded by her own instinctual drives.

The proof is in the pudding and if so, it’s the biggest disappointment of her life.

She has twenty good years of fertility, and that she wastes any of it on a boy instead of a man is a crime against herself committed in plain view of the heavens.

Scarcity is one the most important measures of value. Her short fertility window compared to your long one (at triple or more hers) makes her more valuable by far. She is the valued creator; you are the expendable male.

Not to say anything of the fact she carries life into the next generation, taking two years to physically recover after hosting the child in her body for almost a year. She goes through all that and for her troubles… she thinks she has chosen a man and, a boy shows up. Only, infuriatingly, he doesn’t know he is a boy. She does.

She knows just as soon as the novelty of having found “Mr. Right” fades and the truth sets in. She may cross her fingers and to her credit as a caregiver who uses her compassion and empathy to help grow others, she believes you will become more. When she confirms that you are unlikely to mature, she knows she can’t hide you away from others in her shame and despair…as we exist interdependently… in groups.

Sooner or later, she will be found out. Spiritually, socially, it’s a disaster. It puts her whole existence in doubt.

Sex is no longer on her mind, at least not with you. Her very identity as a woman is at stake. What is wrong with her that she should attract a boy, she asks? To her, she was expecting, she was due power and love… and she was robbed.

Meanwhile, all you can think of is sex, asking why she won’t initiate more or at least… cuddle.

“I’m grown up now mommy! Prove to me you love me!” your unconscious screams out like a high-chair tyrant.

Only… she’s not answering…

What will you do?

Who will you be?

2 comments on “SAND and SALT…”