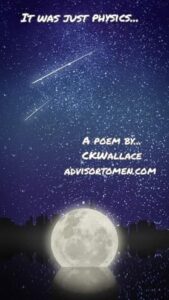 PHYSICS
I don’t know if I could have made
My broken relationship work,
Even with what I know now.

If I think I could, it might be
Simple hubris. And more reason
To beat myself up, giving in to shame,
Paralyzing me with fear and doubt.

The other thing is accumulated pain,
Over many years of troubled marriage
Can put trust out of reach for good

Let’s face it, without trust,
You’ve got nothing at all.
I felt powerless watching it disappear
Before me, like sand through an hourglass.

Despite this, and frequent lamentations,
I was unable to reverse or to turn the glass
Sideways and stop the flow. It takes two.

While it is not for me to demand
Someone grows at a pace I approve,
In trust there can be no compromise.
It’s the test upon which it all turns.

More likely, we were like two asteroids
Hurtling through space on similar
But slightly different trajectories.

It meant for a time we traveled side by side.
Our energies cutting a double swath of light
Through the dark of space and time, like
Star ship headlights perfectly aligned,

Streaking across a darkened sky.
But, eventually, those differences in mass,
Velocity and trajectory began to increase

The distance between us. Try as we might
To maintain our intended cosmic track.
And, just as two orbiting bodies in space
Each have their own path and destiny

Separation was inevitable, becoming
Greater as time went by. Until…
An irrefutable truth was revealed:

We are drifting further and further apart.
Following a grander plan, we don’t need
To understand. In the end, we accept
People always act as they must

We make the best decisions
For ourselves at any time for,
The universe doesn’t make mistakes.

The idea of blame misplaced,
It wasn’t me or her at all.
Summing it up in the end,
I know… it was just physics.