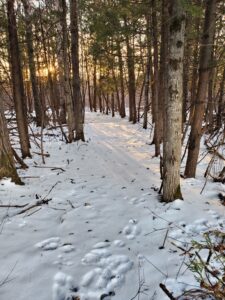 TAKE A WALK WITH ME
If I could encourage you to do one thing in the coming year (or tomorrow), it would be to commit to daily walks. I have been doing them for years, and they are integral to my mental health. Turns out I did not just discover this, having felt the pull of the woods since I was a little boy.

On my parents’ street growing up in the 1960s, ma once told me there were some sixty kids on just our end of the two-block length of Falcon Avenue in Ottawa’s south end. The city put a tree in front of every house property road allowance. These were small saplings which grew a little each year.

But a few TALL trees grew on property lines in people’s backyards, towering over the houses, like giants to a young boy’s perceptions.

Refuge for most of us meant the fields at the end of the block where three primary grade schools, one French Roman Catholic, and one of each Roman Catholic and Public schools in English. All these were once part of Grandma Mason’s farm who kept her home still on Brookfield Avenue between the schools. Behind her place was a fallow ten acres but could have been a hundred to my little boy’s mind. I found great spiders and bugs there all summer.

Beyond all this were train tracks, and beyond these, Sawmill Creek. That is where I spend my best times as a child, rafting, exploring, hunting with bow and arrow, tobogganing in winter, and swinging from a great rope at the swinging tree in summer.

There was a well worn single-file trail along the north side which contoured the winding creek but also rose and fell with the grade. Marvelous, the kind of path you felt you could just walk on forever. It was a place to imagine, to simplify, to recover and soothe.

I was not doing anything others had not done before me. Maybe you remember something like this from your younger years. Most of us spent some time in the woods as kids. Indeed, it is how we evolved, to be outside and explore and revel in nature every day. It turns out our minds calibrate to the outdoors.

A little science
Researchers have discovered a 20-minute walk in nature acts as well as medications like Ritalin to improve impulse control and focus for ADHD kids.

Walking through an arboretum sees working memory improved by as much as 20%. Come back in from a walk and your ability to proofread and catch errors in your writing goes up. You can answer questions quickly and more accurately if given a speedy cognitive test.

And what about that incessant worrying we sometimes do? Nothing like walking outside among the trees and plants to alleviate symptoms of depression. No wonder people love to nourish their soul with a little (or a lot) of gardening. It is better than valium. Your best stress reliever is not a few drinks at the end of the day, but time spent in nature.

Very little of our time is in the fresh air. Most kids in cities do not even play outside daily. With more than half the world’s population living in cities, a number which could reach 70% by mid-century, we are outside starved. This is unnatural, directly against how we evolved over millennium.

A reference
In The Extended Mind, Annie Paul notes that many of the man-made landscapes around the world carry influences from our past. The way Japanese gardeners prune their trees to look like the branches of trees found in East Africa to the great estate gardens of Europe to New York’s Central Park to how southern US landowners irrigate their rain-starved properties stem from the same archetype. “We like wide grassy expanses, dotted by loose clumps of trees with spreading branches, and including a nearby source of water. We like the capacity to see long distances in many directions from a protected perch…  And we like a bit of mystery—a beckoning promise of more to be revealed around the bend,” she writes. Turns out it’s embedded deep within our psyche.

With nature around us we are smarter, more emotionally stable, less stressed, and more productive. Hospitalized patients who have a view with nature recover faster and require less pain medication. Big companies are on to the production connection and adding plants to their workspaces.

How I use it
Since I moved on to acreage almost six years ago, I have benefited from daily walks. I intend to do four per day but often get less. I rarely skip a day. To that end, I keep an uneven trail of about a quarter mile mowed of grasses and cleared with a snowblower in winter. I sometimes exercise by tossing a 30lb ball around it at least once in the times I go around in a day.

Do this tomorrow
Normally it is a walk of about 15 minutes. Most people over-breathe through the mouth in their daily life at 12-18 breaths or more per minute according to Daniel Nestor in his book Breath. He says optimum health require 5.5. So, I take these occasions to practice slowing my nose breathing to 5-6 breaths per minute by counting to six on the inhale and six on the exhale. Once I have the pattern down, I just relax and look around while I walk. I come back to my office feeling like I am ten feet tall.

Mix it up
Often, I take one of the side-paths off the main trail and head in through the trees just for a change. This random wandering helps me regulate my body’s stress but also acts as a salve for my mind, kickstarting problem-solving and making my writing easier. It also helps me better serve clients each day.

One of the most peaceful things I do for my self-care is to meander through the two-hundred acres without a real plan. This is often my “big reward” on a Sunday for a week well done. I am well-equipped with woodsman tools and can be gone an hour or be gone for three or more.

I will bush whack a bit here and there, look for animal sign, find plants I’ve never seen before and see a lot of green. The predictable repetition of being in the forest is a bit like being in the relaxed state of a hypnotic trance. If you step into the woods, in less than a minute, its effects take hold and heart rate and blood pressure settle down.

The BIG picture
The forest is always bigger than I am. “Nature… inspires a feeling of abundance, a reassuring sense of permanence” says Annie Paul. In that sense and beyond, it can trigger awe, that wow feeling we can often find in nature. When I found a Red Trillium plant growing by a creek in the back woods last June, I sat there just admiring it for about fifteen minutes. I had never seen one before and didn’t know they existed. I felt the same way the time I found Doll’s Eyes flowers in full bloom not far away. So cool.

Professor of psychology at the University of California, Berkeley Dacher Keltner, calls awe an emotion “in the upper reaches of pleasure and on the boundary of fear.” It is from there that we open our minds to discover and assimilate new perspectives around us, especially the possibilities and potentials in ourselves and in others. We are all of us under the same heavens of infinite wisdom.

I hope you go for more walks. What would it take for you to make this part of your life? That, no matter what, you give yourself the gift of time in nature? Put away your phone, and allow the left-right-left-right cadence of a walk in the woods activate your hemispheres in harmony.

I am going for one now.

May you be awed…

Merry Christmas and Happy Holidays to you and yours. 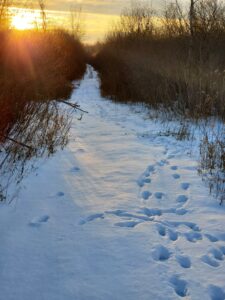 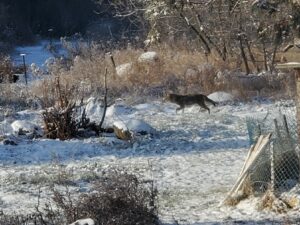 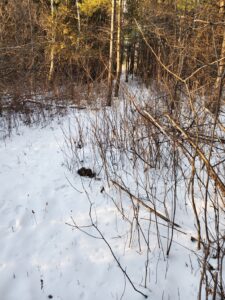 I do free calls to help men and sometimes agree to work with them.
If you are up to it, here’s my scheduler

4 comments on “TAKE A WALK WITH ME”