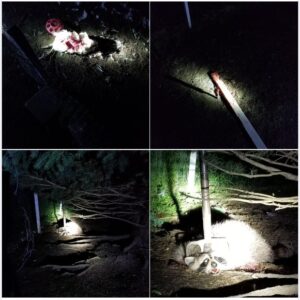 Racoon Revenge
Finally caught the critter who was eating my chickens.
It’d sneak in like a ghost at dusk and kill one, eat its guts and take off.
I figured it was a raccoon so set out a trap for a week and nothing.
Last night, I escorted missus on her rounds to shut her coop.
And there it was, eating her new Easter-egger rooster.
It saw us and took off up the tree.I dispatched the chicken, its heart still beating despite being disemboweled.

Then, I told the missus to hold the high powered flashlight on that tree and make her presence known.
I ran into my garage and got an 8 foot piece of 1 x 3 and reached for the duct tape.
It was gone! Fuck!

So I used that metallic tape instead.
Not as good but should work.
I strapped on a Cutco hunting knife…

I went back and had missus train the light on the upper branches while I stabbed blindly into my best guesses.
The animal roared and growled and fought back blindly as I circled the tree.
Missus kept laughing nervously the way she does when she’s overcome with fear,
“I cant believe this is happening.” Dames.
Finally, after I knew I got him a few times, it came down.
The wounded beast tried to escape over the fence but I used the 1 x 3 to hold it.

“Get me that pitchfork woman,” I commanded.|
Then, I pinned the fucker to the ground with the pitchfork.
“Hand me that brick,” I told her.

I smashed the handle and impaled the thief into the dirt.
Leaving it to die the same death it gave her rooster.
I went back into the house.

We should never forget that.
I took her afterwards.
Perhaps like she’s never been taken…

This morning she said next time she uses something like my duct tape, she’ll be sure to put it back exactly where she found it.
For her good intentions a victory but I won’t hold her to it.
Later, I pinned the racoon’s tail on the chicken coop.

Not that it matters but for all the chickens to see
And a symbolic warning to his comrades.
Tread carefully, to fear my Racoon Revenge…