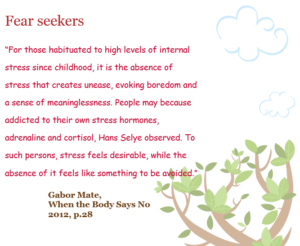 Know any shit-disturbers? Not mild stuff. Not the kind of stuff men are normally involved in, though that’s probably part of it. No, I mean those people who, no matter the situation or state of affairs governing their lives, always find the storm.

And if they can’t find the storm, they create one. They find something, a small thing or a big thing, and zero in on its possibility and push, prod and call out until things blow up.

It could be with people, with systems, hierarchies, but it’s usually with people. They are often closet conspiracy-theorists, sometimes openly suspicious of… everything.

And too often they have a history of addiction. Not always, certainly, then again not everyone is religious or atheist. Shit-disturbing is not foreign to women by any means either. Hell no.

When humans don’t have an answer for something, we often make one up. It’s the nature of the beast. This serves our evolutionary need to come up with something… anything. Our eyes see out after all, so we look for answers in the environment. This works… until it doesn’t.

If a kid is left to cry it out in the crib as a baby, it may cry for hours until it finally falls asleep with exhaustion. The baby wakes up the next day and has survived. Crying (fear) worked for it in this instance. Those elevated hormones came through.

This easy to understand example plays out in countless forms for many of us, all the way into adulthood as we grapple with sickness, tragedy, war.

How many of us are programmed to seek fear in our lives? I know I was. I am. I met fear at an entirely diffrerent level than those around me. Still do. I am drawn towards the shit storms, strangely attracted to them. Where others move away, I advance, sometimes dangerously.

I have to watch this carefully. So I do.

When I first solved the riddle of addiction, these words you see in the graphic lept off the page at me. I’d read Mate’s book about addiction, Hungry Ghost, but he doesn;t menton this. Ghost is a good book and makes excellent observations, especially around trauma as a precursor to addiction.

It was when I read another of his books, When the Body Says No (2012), that I saw this quote. I’d written my understanding of addiction to that point in my first book, Drinker’s Riddle. The idea of paradoxically seeking fear figures prominently in that work, because I had realized its force over me after 40 years of using drugs and alcohol.

I knew I used drugs and alcohol to hijack my sympathetic system to fill an internal need.

Seemed to me Mate had the same answers but didn’t make the connection. In Ghost, he thought addiction was about trauma. I’ve heard him say, “every addict has trauma but not every person with trauma becomes an addict.” Lots of truth to this and more right than wrong. But to me, that makes it a weaker contention, an incomplete theory.

I searched for the Hans Selye quote as he mentions it, meticulously reading two of Selye’s books. That’s when I realized he’d written so many I’d be at it forever, and still might miss the damn quote. I was trying to source it so I could credit it properly.

So, I wrote Mate congratulating him for his work, expressing my gratitude for the light he shines on addiction. I asked him about the quote. Nothing.

Then, I contacted the Selye folks, those who continue his legacy in stress management. They were really helpful, loved my theory. The quote? Nothing, they had no idea how Mate came up with it.

Finally,  I told Mate by email it was an important quote and Selye’s people can’t find it. He wrote back admitting he’d put it together from what he’d read of Selye’s writing–someone whose work forms the basis of his understanding about stress (and now mine).

I thought that was pretty decent of him. I didn’t know anything about how you’re supposed to assign source credit for stuff you write about so it was a good lesson. And it was a lesson in responsibility too. Rather than bullshit me, he straight up told me it was his impression.

And it’s understandable. Even if Selye didn’t say these words directly, to not quote him would have been borrowing or leaning too heavily on his work without a mention. I learned something about that distinction from this quote.

More importanly,  it’s enough for all of us to understand we can be programmed from our early years to seek stress. We may not like to admit it, but shit happens, and at some point fear may have been seared upon our soul. Branded this way at a physiological level, we may go searching for it.

There’s a price to pay for this, in relationships, health, longevity, happiness. And what of spirit? Spirit is handcuffed by this tangled mess of methyl groups acting epigenetically on DNA coupled with your databank of emotional experiences operating beneath the surface of awareness. The soul.

Yoga helps, so does heart rate variability training, as does committing to understanding the signals coming from your body in various circumstances so you can address underlying stress and breathe differently, taking control, and then thinking better. If your baseline stress level is “always on”, you can learn ways to shut it off. Or lessen it’s strength.

The pay off is less restlessness, more meaning, less boredom and a longer life. You may even feel more happiness.

That’s worth fighting for.

Stay powerful: never give up